Medical image processing, which includes many applications such as magnetic resonance image (MRI) processing, is one of the most significant fields of computer-aided diagnostic (CAD) systems. the detection and identification of abnormalities in the magnetic resonance imaging of the brain is one of the important applications that uses magnetic resonance imaging and digital image processing techniques. In this study, we present a method that relies on the symmetry and similarity between the two lobes of the brain to determine if there are any abnormalities in the brain because tumours cause deformations in the shape of one of the lobes, which affects this symmetry. The proposed approach overcomes the challenge arising from different shapes of brain images of different people, which poses an obstacle to some approaches that rely on comparing one person’s brain image with other people's brain images. In the proposed method the image of the brain is divided into two parts, one for the left lobe and the other for the right lobe. Some measures are extracted from the features of the image of each lobe separately and the distance between the corresponding metrics are calculated. These distances are used as the independent variables of the classification algorithm which determines the class to which the brain belongs. Metrics extracted from various features, such as colour and texture, were studied, discussed and used in the classification process. The proposed algorithm was applied to 366 images from standard datasets and four classifiers were tested namely Naïve Bayes (NB), random forest (RF), logistic regression (LR), and support vector machine (SVM). The obtained results from these classifiers have been discussed thoroughly and it was found that the best results were obtained from RF classifiers where the accuracy was 98.2%. Finally, The results obtained and the limitations were discussed and benchmarked with state-of-the-art approaches. 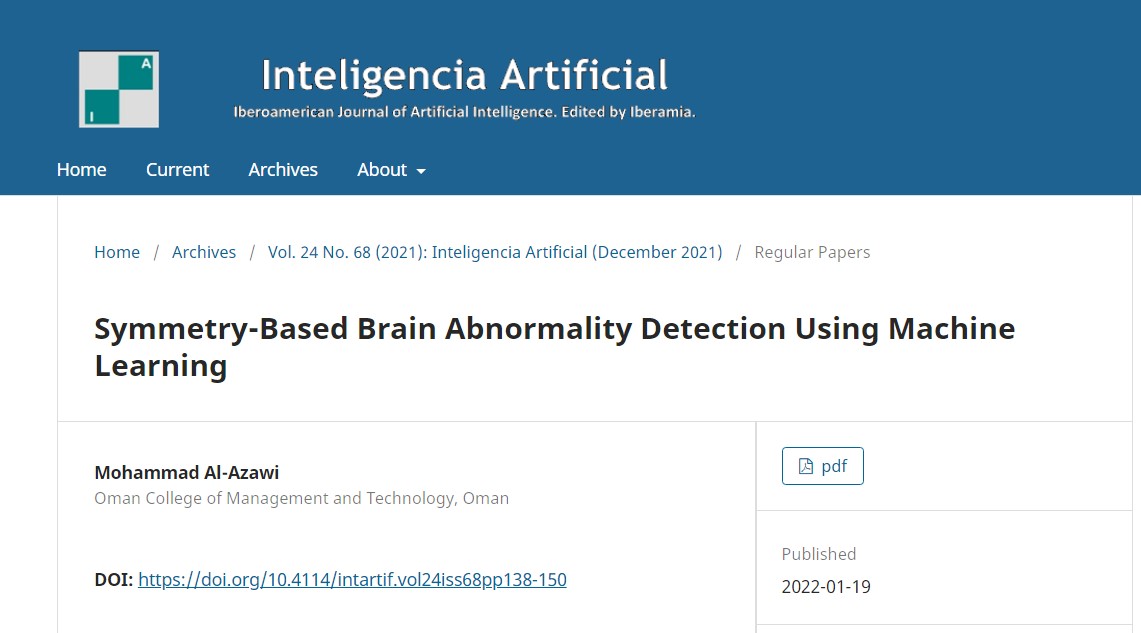 in News and Blogs
Presenting a Paper in
International Conference on Advances In Data Computing, Communication and Security (I3CS), Sept. 8-10, 2021